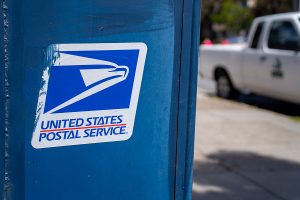 In mid-August, the U.S. Postal Service (“USPS”) revealed plans to develop and implement blockchain technology on voting systems, in an effort to further develop secure alternatives to in-person voting. Published by the U.S. Patent and Trademark Office (“USPTO”) on August 13, the patent filing states:

This development relates to a voting system that also incorporates the use of cryptographic elements, such as blockchains, as are used with cryptographic currencies, to track and secure the vote by mail system.”

Speaking to Cointelegraph shortly after the USPTO filing,  Rep. Darren Soto (D-FL) described the blockchain voting operation: “The USPS and their technology would be sending out QR codes and storing digital IDs and votes on the blockchain. They’d even be able to separate ID from votes, to preserve anonymity.”1

While there is some hesitance for the election system to fully embrace technology, others feel that the only trusted national agency capable of managing remote voting is the USPS.2

Soto, who serves as co-chairman of the Congressional Blockchain Caucus, shared his optimism for the USPS move, stating, “I think it’s a great idea. I’m real excited that the post office is working on this issue. It’s something that was a pleasant surprise for many in congress.”3

The news does appear to be promising for future election cycles, even if the blockchain mail-in voting system will not be available for use in the 2020 Election. In the meantime, the patent remains to expound upon several items, such as a clear explanation of voter anonymity and how paper backups would be managed.

Considering the Trump administration’s irrationally hostile stance on expanding reliable mail-in voting,4 the USPS will need to rise to the occasion of ensuring a way for Americans to continue to safely vote in the future.