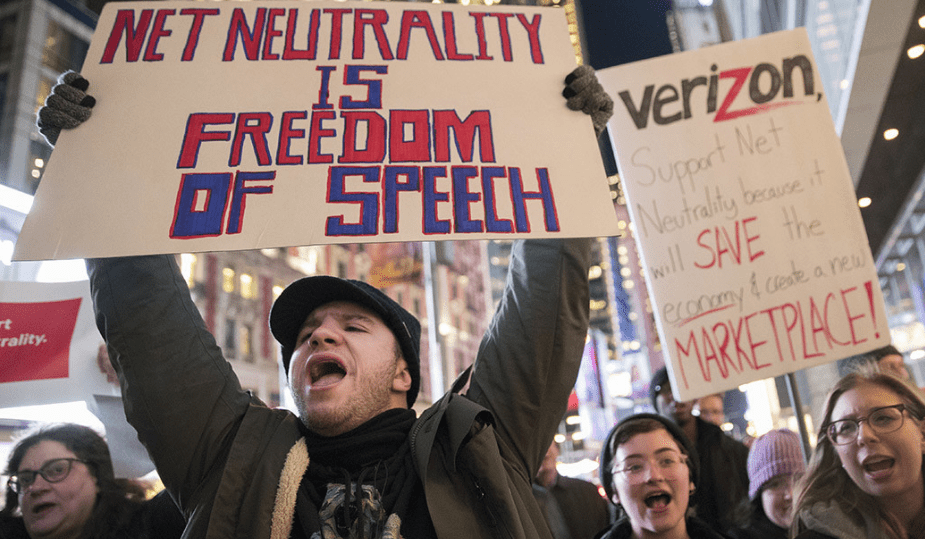 I wish that this was fake news: The FCC just killed net neutrality.

In a 3-2 vote today, the Federal Communications Commission approved a measure to remove the tough net neutrality rules it put in place two years ago. Those rules prevented internet providers from blocking and throttling traffic and offering paid fast lanes. They also classified internet providers as Title II common carriers in order to give the measure strong legal backing.

Today’s vote revokes all of that, as it removes the Title II designation, preventing the FCC from putting tough net neutrality rules in place even if it wanted to. The FCC really doesn’t want to, an FCC controlled by Republicans and run by a former Verizon general counsel. The new rules largely don’t prevent internet providers from doing anything. They can block, throttle, and prioritize content if they wish to. The only real rule is that they have to publicly state that they’re going to do it.

This is a blatant disregard for the freedom of press and anyone who thinks otherwise is blind, ignorant, or in the pay of the ISPs. THE CONSUMER IS GOING TO GET FUCKED. THE FIREHOSE OF INFORMATION THAT IS THE INTERNET IS NOT SUBJECT TO THE WHIMS OF THE HIGHEST BIDDER. If you thought the misinformation around the election was bad, the manipulation of the media during the 2016 election will be child’s play when those same forces can now subtly (or blatantly) prohibit any viewpoint other than their own from being delivered to the public. This is truly a breach of the public trust, a betrayal of the citizens of this country, and given the fact that virtually everyone gets their information from the internet, likely a violation of the first amendment.

Opponents of net neutrality argue that the rules were never needed in the first place, because the internet has been doing just fine.

“The internet wasn’t broken in 2015. We were not living in some digital dystopia,” commission chairman Ajit Pai said today. “The main problem consumers have with the internet is not and has never been that their internet provider is blocking access to content. It’s been that they don’t have access at all.”

WRONG. It’s false to say that all of the harms these rules were preventing are imagined: even with the rules in place, we saw companies block their customers from accessing competing apps, and we saw companies implement policies that clearly advantage some internet services over others. Without any rules in place, they’ll have free rein to do that to an even greater extent.

Supporters of net neutrality have long argued that, without these rules, internet providers will be able to control traffic in all kinds of anti-competitive ways. Many internet providers now own content companies (Comcast and NBCUniversal), and they may seek to advantage their own content in order to get more eyes on it, ultimately making it more valuable. Meanwhile, existing behaviors like zero-rating (where certain services don’t count toward your data cap) already encourage usage of some programs over others. If during the early days of Netflix, you were free to stream your phone carrier’s movie service instead, we might not have the transformational TV and movie company it’s turned into today.

Both Rosenworcel and Clyburn also criticized the FCC’s handling of the public comment period that proceeded this vote, saying that the administration acted inappropriately in ignoring millions of voices in support of net neutrality. “It is abundantly clear why we see so much bad process with this item: because the fix was already in,” Clyburn said. Rosenworcel said the commission showed a “cavalier disregard” for the public and a “contempt” for citizens speaking up.

The vote comes after a contentious and messy public comment period. After opening the proposal up for feedback earlier this year, the commission received a record-breaking 22 million comments. But many of those comments were spam — 7.5 million, according to the commission — and the FCC has refused to help investigations into what happened. The commission was also quiet about website problems that caused its comment form to crash briefly in May.

Those comments are likely to play a role in whatever lawsuit hits following this vote. Net neutrality supporters are almost certain to sue the commission in an attempt to invalidate this proceeding and restore the 2015 net neutrality rules. While the commission is allowed to change its mind, it isn’t allowed to change rules for “arbitrary and capricious” reasons. In court, the FCC will have to prove that enough has changed since 2015, and that there’s enough evidence in the record of comments, to back up the conclusion that it ought to revoke net neutrality.