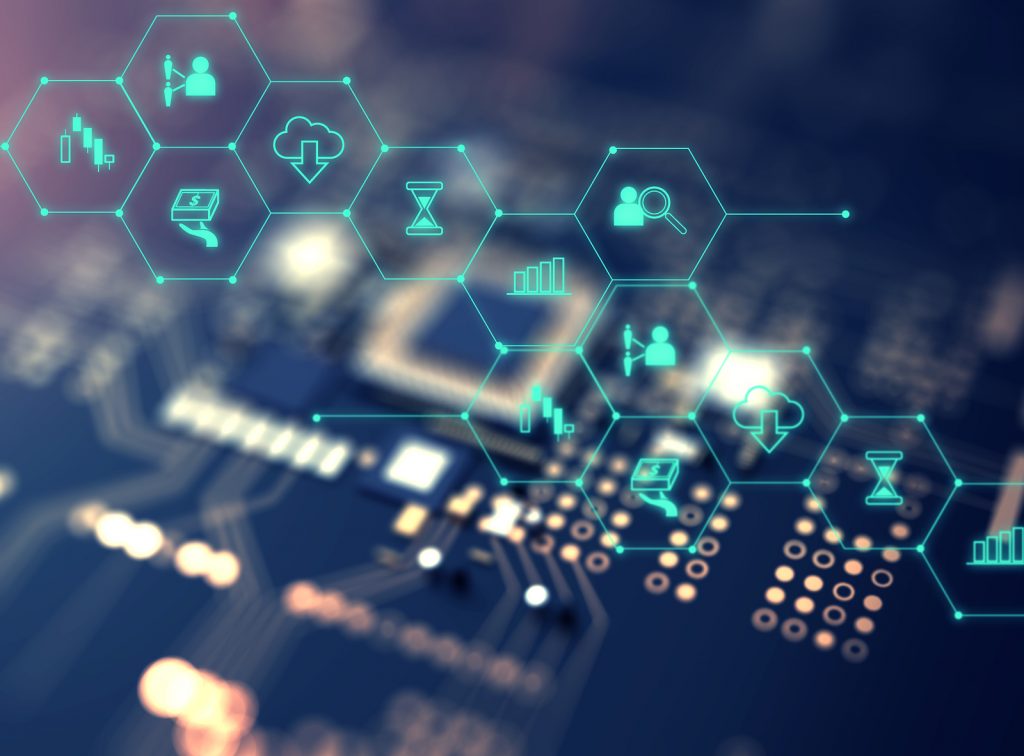 Despite doubt over the industry’s staying power and fluctuating market capitalization, cryptocurrency has made significant steps into the mainstream in recent years. Between 2017 and July 2018, researchers at the University of Cambridge found that millions of new user accounts entered the crypto industry through various service providers, with over eighty percent of service providers now offering multi-coin support.[1] The surge in crypto users also mirrors the increase in corporate interest regarding the blockchain technologies that support various digital tokens. According to PwC’s 2018 Global Blockchain Survey, of the 600 senior officials surveyed, 84% stated that their companies were actively involved with blockchain technology.[2]

Regardless of the attention that blockchain technologies and cryptocurrency continue to collect, their implementation is still considerably far from widespread. Interest has not brought regulatory clarity, and governments worldwide struggle with inconsistent terminologies to develop a comprehensive system that addresses crypto-assets.[3] In 2018, Cowen reported that the widespread adoption of blockchain technology was estimated to take 5.9 years. Technology conglomerate, Cisco, even stopped their study on blockchain’s application due to the length of time needed, “for the many players in the complex markets to get up to speed.”[4]

Many stakeholders have discussed the need for further developed cryptocurrency systems and more internal self-regulation in order to standardize the market, however, issues related to digital tokens have recently gained significant lobbying attention as well. In April 2019, 80 firms were reported to have spent $42 million lobbying broadly on financial technology (“FinTech)” in the year’s first quarter, with more than half of those firms specifically indicating blockchain and cryptocurrency concerns.[5]  These firms are required by the Lobbying Disclosure Act (“LDA”) to file quarterly reports with the Senate and House on their lobbying activities, as well as identifying clients and their interests. Some of the entities listed with specific lobbying interests in blockchain or crypto-assets are Ernst & Young, Accenture, IBM, Mastercard, and the Association of National Advertisers, among others.[6]

According to the Lobbying Disclosure Act Database, several organizations, such as IBM and the American Property Casualty Insurance Association, have lobbied for specific legislation to improve the industry. One example is the Blockchain Promotion Act, which, if passed, would require the establishment of a working group to supply Congress with a definition of blockchain technology, along with recommendations on studying its impact on electromagnetic spectrum policy and its potential applications by the public and federal agencies. National Venture Capital Association has also lobbied for crypto legislation,[7] specifically the reintroduced Token Taxonomy Act, which aims to remove digital tokens from the definition of security as defined in the Securities Act of 1933 and the Exchange Act of 1934. 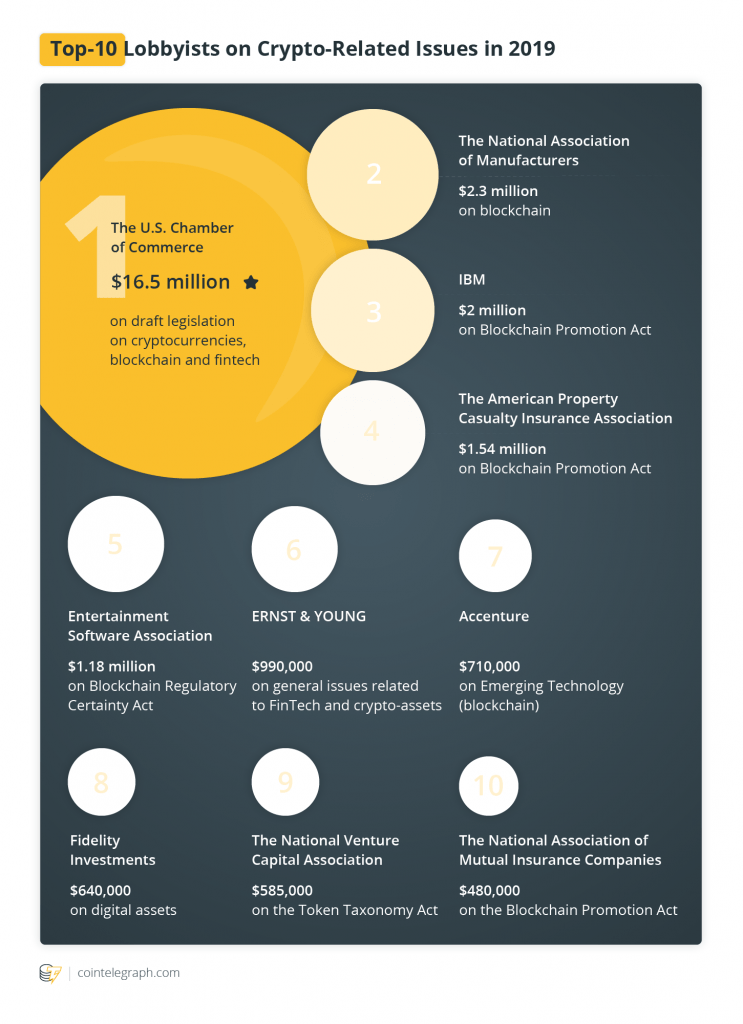 Referring to Rep. Warren. Davidson’s (R-OH) proposed Token Taxonomy Act, Blockchain Association representative, Kristin Smith, emphasized the importance of separating digital tokens from securities law stating, “That’s probably been our biggest focus. And it will continue to be our biggest focus for the next couple of months.”[8]

Aside from securities issues, digital tokens also face significant obstacles on taxation, as cryptocurrencies can be considered as more than just currency. The Internal Revenue Service (“IRS”) considers crypto-assets to be a type of property, and therefore requires the purchase of fiat money, or goods and services, and payment of the tax liability connected to the transaction.[9] Non-profit research and advocacy group, Coin Center has indicated their hopes for regulation in the coming year, despite the lack of clear taxation direction from the IRS. Speaking to Roll Call, the center’s executive director, Jerry Brito, explained, “The IRS has given no guidance how they’d treat that, so people are guessing.”[10]

While the overall boost in awareness regarding the current challenges presented to crypto could be seen as generally helpful to the industry, many of the organizations currently involved in fintech lobbying have vaguely detailed lobbying agendas. One example is Ernst & Young, who attributed their nearly $1 million spending on lobbying for, “general issues related to FinTech and crypto-assets,” and other issues, “related to innovation, emerging technologies, and blockchain.”[11] Some even note their interest in digital tokens as “blockchain” without further details. Without a clearly reported lobbying goal, stakeholders can only speculate on the intentions of some lobbying firms. Considering the broad range of issues that the industry currently faces, generic blockchain lobbying may not be focused enough to resolve specific cryptocurrency matters.

Another point of concern regarding the recent lobbying is the skyrocketing number of traditional companies, those that exist outside of the original Distributed Ledger Technology (“DLT”) sector and have a vested interest in the status quo outpacing the efforts of the DLT native ventures. With lobbying efforts increasing, and traditional organizations spending the most, stakeholders participating in the market may need to adopt new tactics to achieve adequate representation on their interests. For example, despite its importance in shaping the industry’s future, National Venture Capital Association is the only one of the top ten crypto-related lobbyists that has explicitly lobbied for digital token exemption from securities law.[12] It is not a stretch to see non-DLT native companies spending so much on lobbying as an effort to ensure that DLT technology serves the traditional captains of industry rather than realizing its full “disruptor status” as a trustless, institution free, democratization of currency, capital, and privacy. Firms like Ernst & Young and Mega Banks like Bank of America certainly have a vested interest in regulations that ensure their primacy.

With that said, the increase in lobbying efforts for cryptocurrency is an indication that it and the blockchain industry are pushing into the mainstream. Differences in lobbying concerns aside, public interest in crypto does not appear to be slowing even with the industry awaiting further regulation. As of last fall, 42% of the top 50 universities worldwide now teach at least one course on blockchain technology or cryptocurrency.[13] New York University Stern School of Business finance department chair, David Yermack, began offering a course on blockchain and financial services after becoming personally interested, however, it’s now used to prepare students for the future of data management.

“A process is well underway that will lead to the migration of most financial data to blockchain-based organizations,” Yermack stated when speaking to digital currency platform, Coinbase. “Students will benefit greatly by studying this area.”[14]

Cryptocurrency’s potential has not gone unnoticed by the general public, and certainly on the radar of operators in traditional market sectors, but the regulatory hurdles opposing the technology will need to be addressed for more mainstream adoption. Students and companies are poised to integrate blockchain systems in the future, yet the industry needs to cover significant legal ground to firmly establish the staying power and legitimacy of crypto assets. The boom in cryptocurrency lobbying may not have produced pronounced change yet, however, its increase does insinuate that market is of immediate interest and may very well see reform in the near future… who that reform actually benefits remains to be seen.

[11] Chandler, Simon. “Why Lobbying Growth Is a Sign That Crypto Is Maturing.”

[14] Coinbase. “The Rise of Crypto in Higher Education.”